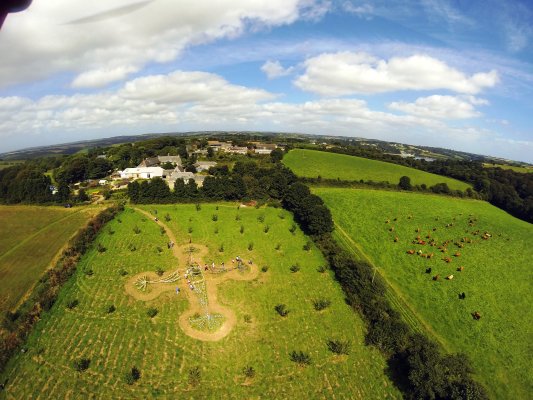 The Keskerdh An Kammva Dro was made for 'Site Non Site' - a group exhibition by the Newlyn Society of Artists at Kestle Barton Rural Centre for Contemporary Art in October and November 2012. The brief was for contributing artists to create two interrelated pieces of work – one in the landscape (in the fields, woods or gardens of Kestle Barton), and one in the Kestle Barton Gallery.

My landscape piece, the Keskerdh An Kammra Dro, was sited in the orchard at Kestle Barton. It was featured in my gallery piece, a 15 minute video documentary, The Seasons' Turning.

Click here to read a transcript of the narrative.
The Keskerdh An Kammva Dro is a fictional ritual that draws upon ceremonies and customs conducted locally to mark the cycle of the seasons. Roughly translated from the Cornish, it means ‘Procession around the Turnstile.’

CONTEXTUAL BACKROUND OF THE KESKERDH AN KAMMVA DRO
In the farming community, making a living means planning and working the land within limits set by the rotation of the seasons. Success depends upon a predictable rhythm of seasonal change. But sometimes the unexpected happens with the weather or seasonal conditions; it’s too hot, too cold too wet or too dry and crops fail. Throughout history, in an effort to influence elemental forces and thereby ensure the safe return of the next season and a good crop, people who work the land have performed rituals and ceremonies.

The narrative of the video 'The Seasons' Turning' is focused around the following passage by the eminent Cornish writer, Clara Vyvyan. She lived at Trelowarren, which is near Kestle Barton, in the heart of the Lizard peninsula. She said:

‘If I were asked to describe the country briefly I should use the single word magic’…that sense of ‘something more’ behind or beyond or beneath things tangible or visible. Its atmosphere of magic …. was concerned with streams and their secret undergrowth and the coastal track that led along the high cliffs and down in to valleys, with bird life and wild flowers and moor land space; and these things have not yet been obliterated in this obliterating age of the bulldozer’… and these qualities, and this magic is ‘dangerously near extinction, threatened by the noise, ugliness and crowds of the industrial age’.

The narrator of The Seasons’ Turning is looking for the survival of Clara Vyvyan’s ‘sense of something more’ through the ceremonies, symbols and rituals used locally to mediate between people who work the land and the elemental forces over which they have no control.

During the video the narrator interviews William, an elderly farmer who lives locally. This interview serves as a voice-over for some footage of the Keskerdh in process, with the farmer describing his experience of it and other local customs.

DETAILS AND DIMENSIONS
William describes the Keskerdh as a march around a route marked out in the shape of a cross. The cross (the Kammva Dro) sited on a piece of land selected by a farmer for special attention. Each of arm of the cross is decorated with coloured bunting to represent a season. The marchers – the farmer’s family and friends - follow the coloured route around the cycle of the seasons. They wave banners or branches, bang drums or blow whistles to a four part beat - the noise and energy generated keeps the turnstile moving.

The longest arm of the Turnstile – the Bregh Hir – represents the season opposite the current season. Because it is the longest arm, the distance around the Bregh Hir demands an extra effort from the walkers, and like a force upon a giant handle, it delivers the necessary push to keep the seasons turning. When the Keskerdh takes place in the autumn, it is to ensure the return of the spring and the renewal of the land.

In another part of the video we are told by William's niece Alice, who we see making bunting for the Keskerdh, that in the past the bunting was created using plaited twine with fragments of dyed sacking or cloth. Today it is made of expendable material found readily to hand in any local community: Alice is making the bunting out of plastic carrier bags.

LINKS WITH ST. BRIGID'S CROSS
The Kammva-dro may be linked to the St Brighid’s Cross. In parts of Ireland Brighid is known as goddess of the crossroads, and this symbol represents the place where the two worlds meet, and the year is at a crossroads between light and dark. The cross may be placed on or over doorways of farm buildings, in anticipation of the new season’s return. Alice's husband encounters the narrator looking at a Kammva Dro cross on a barn door that he has been asked to put there by his mother in law.

Click here to read a transcript of the narrative.
Next
Previous